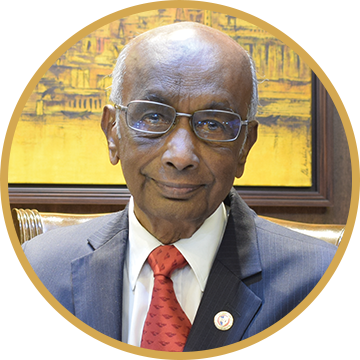 He has served the Federation of Karnataka Chambers of commerce and Industry and the All India Manufacturers’ Association as President and also as Chairman of the Institute for Social and Economic Change, Bangalore.

He was a Senate Member of the Bangalore University and Chairman of the Karnataka State Industrial and Investment Development Corporation.

His services were well recognized by the Government of Karnataka by conferring on him the “KARNATAKA RAJYOTHSAVA AWARD”.

He has varied interests and has been associated as Director or Chairman of a number of Companies from Food to Aluminium, Travel, Automobiles, Finance etc.

He has served as a Member on several Committees of Govt. of Karnataka as well as Govt. of India. He has also served on the Board of Governors of Indian Institute of Science and as a Member of Advisory Committee of CFTRI and Defence Food Research Lab.

He was awarded with a Doctorate degree by the Avinashilingam University for Women, Coimbatore for his services in the field of education.

In 2009, he was also awarded with an Honorary Doctorate Degree (Honoris Causa) from Mangalore University for his services in the field of education.