C. Gopinath is a US-based academic.

His educational credentials include a Ph.D. (UMass Amherst), PGDBA (IIMA), MA (Delhi School of Economics) and BA (Madras University). He has previously served on the faculty of the Jindal Global Business School, OP Jindal Global University, Delhi NCR (where he was Dean); Suffolk University, Boston; University of Delaware, Newark; and Vivekananda College, Chennai.

His areas of interest are strategic management, international business and pedagogy. Prior to his academic career, he held executive positions at leading companies.

His research has been published in several academic journals. His books include Globalization: A multidimensional system 3ed. (2018, Edward Elgar) and Strategize! Experiential exercises in strategic management 4ed. (2013, Cengage/ South-Western, with J. Siciliano).

Maternity benefits of at least Rs. 6,000 per child are a legal right of all Indian women under the National Food Security Act, 2013. In practice, a large majority are still deprived of maternity benefits. A recent survey, conducted in six states of north India, brings out that pregnant women’s basic needs for nutritious food, proper rest and health care are rarely satisfied. Among women who had delivered a child during the 6 months preceding the survey, about half said that they had been eating less rather than more during pregnancy, and nearly 40 per cent complained of a lack of rest at that time. The figures are much worse in states like Uttar Pradesh, where, for instance, one third of the same women had not had a single ante-natal checkup. Average weight gain during pregnancy was just 7 kg over nine months in this sample, down to 4 kg in Uttar Pradesh. Aside from poor nutrition, lack of rest appears to be a major factor of low weight gain during pregnancy. There is an urgent need for better recognition of the special needs of pregnancy, provision of maternity benefits in accordance with the law, and better support for pregnant women including quality health care.

Entrepreneurship and Innovation for Poor 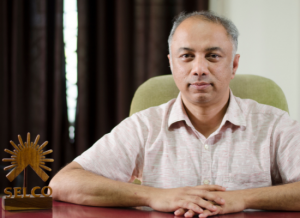 Harish Hande, the founder and Chief Executive of SELCO Foundation, is a renewable energy entrepreneur with over 25 years of grassroots experience in meeting the energy needs of underserved populations.He is also the founder of SELCO India – a pioneering last mile rural energy enterprise based in India since the early nineties.

Finally, SELCO Fund registered in 2016 is an impact fund that seeks to deploy patient capital such as equity or debt to last mile energy access enterprises. SELCO operates at every level of the system and at every point in the supply chain, to build an ecosystem that increases accessibility, affordability, and appropriate renewable energy solutions for the poor. Collectively SELCO has so far impacted over 2 million people.

Harish, a graduate from the Indian Institute of Technology, Kharagpur and a Masters and PhD from University of Massachusetts, US. In recognition of his vision and the efforts of SELCO, they have been awarded national and international awards including the reputed Zayed Future Energy Prize in 2018 and the Skoll Award for Social Entrepreneurship – 2018. In 2011, Harish was conferred the Ramon Magsaysay Award in recognition of his vision to catalyse development outcomes via sustainable energy. 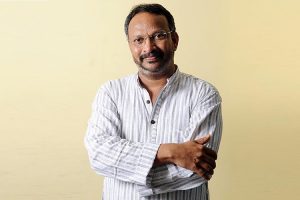 Mr. Bezwada Wilson is leading a nationwide movement to abolish the dehumanizing practice of manual scavenging in India.

Since its founding Safai Karmachari Andolan, under the leadership of Mr. Wilson, has served as a watchdog advocating for legal reforms to end the use of dry toilets across India and are preparing manual scavengers to achieve alternate sources of income.

Mr. Wilson over the years has strived to detach manual scavenging and sanitary work from Dalits, in the larger context of reforming the caste system, and also by working with the government agencies to replace manual scavenging with mechanized practices.

Mr. Wilson’s work at SKA, a community-driven movement, has been recognized by the Ashoka Foundation which has nominated him a Senior Fellow. For his extraordinary work, he was honoured with the prestigious Ramon Magsaysay Award in 2016.

RV University’s academic classes are scheduled to begin from September 20th 2021, faculty and staff eagerly await to interact, educate and learn from the students. 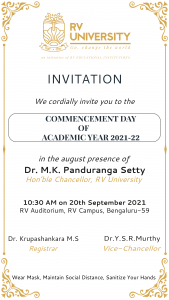 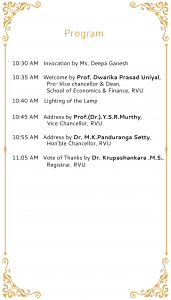