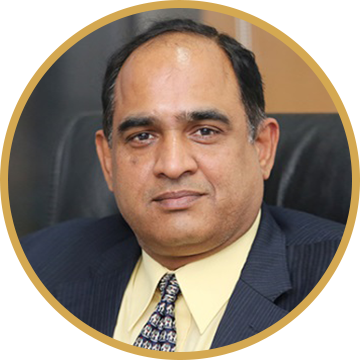 Prof. (Dr.) Y.S.R. Murthy assumed charge as the First Vice Chancellor of RV University, Bangalore recently. As a former civil servant from the 1985 batch of IAS and Allied Services, he held many responsible and sensitive assignments including in the National Human Rights Commission, Prime Minister’s Office, President’s Secretariat and Cabinet Secretariat. Between 2009 and 2020, Dr. Murthy steered the O.P. Jindal Global University during its rapid expansion phase as a part of its top leadership team as the Registrar. He contributed to its rise in international rankings and becoming an Institution of Eminence (IOE).

Prof. Y.S.R. Murthy has published several books, book chapters and journal articles. He holds a Bachelors and Master’s Degree in Statistics from the University of Madras, M.A. degree in Human Rights from the University of London and Ph.D. degree from the Tamil Nadu Dr. Ambedkar Law University, Chennai. He secured University First Rank in M.Sc. and also the prestigious British Chevening Fellowship.

Dr. Murthy has been elected as the Vice President of Indian Society of International Law (ISIL) for a three year term between 2018 and 2021. He is a National Coordinator of SWAYAM, besides being a Member of the Association of British Scholars. In 2019, Dr. Murthy was appointed as the Member, Haryana State Higher Education Council. He is consulted by the Government of Kerala, IGNOU, JNU, Delhi University and some prominent human rights organisations.