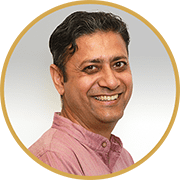 Founding Dean, School of Business and School of Economics

Professor Uniyal, is the former Dean of FLAME School of Business, FLAME University. He brings with him rich and varied experience of more than 25 years in premier academic institutions and industry. In an academic career spanning over two decades, Professor Uniyal taught at premier Business Schools like IIM Kashipur (where he was Assistant Dean of Exec Education and headed its Dehradun campus) MICA – Ahmedabad, SPJIMR – Mumbai and SP Jain School of Global Management – Dubai.

In the past he had been invited by the Govt. of India to serve as Professor of Management in India’s premier academy, LBSNAA – Mussoriee, to train India’s civil services. Professor Uniyal served on the board of Braithwaite & Co. Ltd., a CPSE in the Ministry of Railways as an Independent Director and was instrumental in reviving the sick PSU.

He also serves on the advisory boards of social and commercial enterprises like SDCUK, Project FUEL, Venture Garage, Little Local, Himalaya2Home to name a few.

In the academic world he is known for his bestselling book, ‘Managing Retailing’, published by Oxford University Press.

He is an academic entrepreneur having worked towards many startup institutions as part of the founding team like SP Jain Global, Dubai, Chitkara University, Himachal Pradesh, O P JINDAL University Sonepat and IIM Kashipur.

He is a published poet and dabbles in creative writing for the advertising world with creative agencies like ASR and ARM Worldwide.