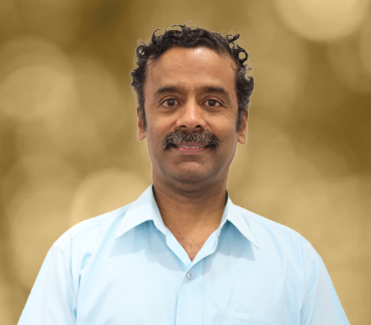 chandramouleeswarans@rvu.edu.in
“Mouli has an industry experience of 28+ years in embedded systems, networking, and software areas, and the last six years in academics. He started his career at LRDE, DRDO, Bangalore, where he was responsible for the Radar Data Processor (RDP) for Rajendra Phased Array Radar, the heart of the Akash missile system. He has worked with semiconductor and product companies in various senior techno-managerial roles at Motorola, Lucent Microelectronics, Agere Systems, LSI, SHARP, and Honeywell. Mouli has worked on in-house RTOS development at Motorola. He was heading the Networking software division as Director of Engineering at Agere Systems and LSI Bangalore, with a team of 100+ engineers, working on various networking products based on ARM SoCs. He was heading the Automation Control Solutions team of 180+ engineers at Honeywell, Madurai, as Director of Engineering, Mouli has immense interest and six years of experience in teaching too. He has recorded 45 hours of a video course on “ARM based development”, which is available on NPTEL and National Digital Library of India (NDLI). While Mouli was working as an Adjunct Faculty at IIIT Bangalore in the year 2015, he was sent on deputation for four years to Myanmar Institute of Information Technology (MIIT), Mandalay, (an Indo-Myanmar Govt. project), where he designed and delivered 25+ theory and lab courses for BE (CSE & ECE). As an Adjunct Faculty at upGrad, he has recorded video lectures on Electrical and Electronics Circuits, modules on multicore performance metrics, and on Recurrent Neural Networks (RNN). He was also a visiting faculty at IIIT Lucknow, handling courses on Python and AI for IoT. Before joining RVU he was working at IIIT Bangalore as Adjunct Faculty for a year and handled, Microprocessors and Microcontrollers (ARM), RTOS, OS-Lab courses. Mouli holds three patents granted by the USPTO. He is a Six Sigma Green belt and also a Certified Scrum Master. “

"To achieve greatness one should live as if they will never die. - Francois De La Rochefoucauld"

"To achieve greatness one should live as if they will never die. - Francois De La Rochefoucauld"

Patents: Method and apparatus for generating a graphical interface to enable local or remote access to an application having a command line interface.